So we just won an AIA design competition...

I was part of a team that tied for first place in the AIA San Diego 'Balboa Park Centennial Gateway' Competition. Not bad, considering there were 55 entrants to the competition. To be honest, I didn't actually do much to earn a spot on the team. I just took the photos they used for background, and made some suggestions about the pedestrian bridge design on the east end of the park. But the guys at DBRDS did all of the heavy lifting, and were kind enough to include me in their design team for the submission so I've officially won, too. 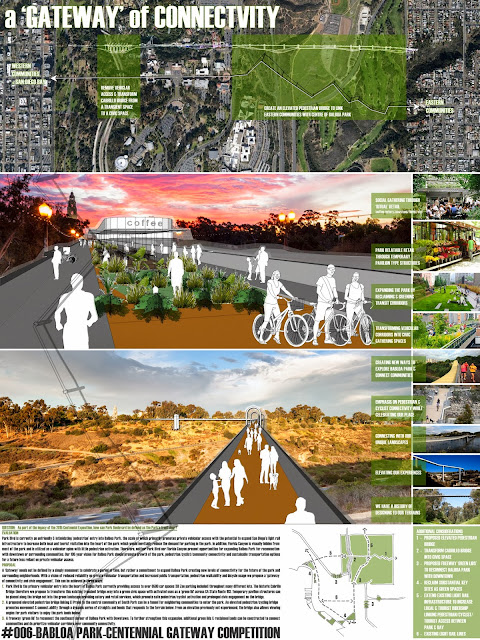 Pauly, Ivan, and Craig at DBRDS did all of the real work for this, including the idea of competing and putting together the submission.

The competition brief called for a new gateway to Balboa Park along Park Avenue, which is the main road that traverses the park for vehicular traffic. But DBRDS rejected that notion that cars should need a new gateway to the park and instead decided to bring it back to a more pedestrian-friendly solution - by taking the cars off of Cabrillo Bridge. There's nothing new in this idea because the bridge was originally dedicated to pedestrians during the exhibition for which it was designed and built. There's also plenty of recent precedent with the High Link park in New York City, and the Promenade Plantée in Paris.  Yet for some reason, we refuse to even consider the idea that cars should be removed from the bridge now…

By creating some commercial activity along the bridge that would be appropriate for parks (like NYC's Shake Shack, or florists, or other cafes, etc. we'd create a true destination for pedestrians to spend time on the bridge, enjoying the view.

The other part of the proposal was to increase pedestrian access from the eastern side of the park.

There are several great communities on that side, but they are almost completely cut off from the main part of the park due to the multiple roads and no-man's-land on that end of the park. DBRDS's solution was to create a long pedestrian bridge to link those communities to the cultural center of the park, and create a veritable east-west pedestrian axis. 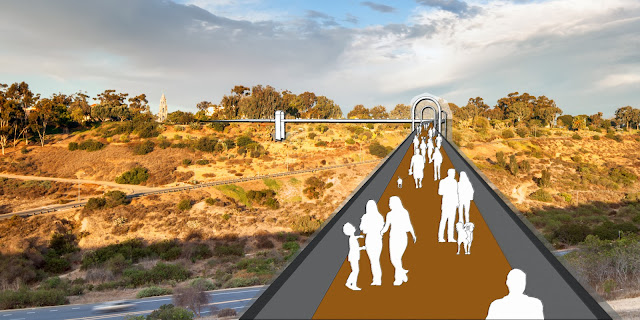 The other parts of the plan, as listed below, included renewing the connection with the central downtown core through putting a lid on the 5 freeway through the S-curve (an idea which I have been advocating for years), extending the light rail access into the park, and other ideas. 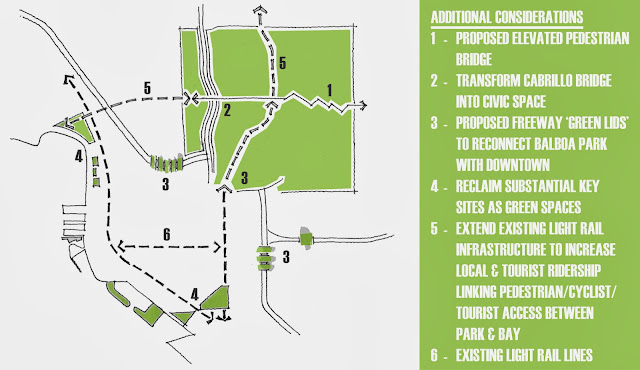 Anyway, I'm honored that the guys at DBRDS would include me on the submission as a part of the team. I wonder if this is a first for an architectural photographer ;-)…

Our team, DBRDS, tied for first place. First place was a $500 reward. Hopefully, it will also mean that they actually build the design. But knowing our city's lack of ambition and vision, that's not very likely to happen anytime soon.

Here's the AIA site with details of the competition.
And here's the article in the San Diego Union-Tribune describing the contest and the winning entrants.

Great comments, and of course you're a member of the team. You make us all look so good!