Double Diamond: My Summer Adventure in the Hamptons

Welcome to the Pearlroth House, otherwise known as the Double Diamond. Like many of the homes designed by architect Andrew Geller, this one seems to defy gravity. It's completely over-designed and over-engineered for a modest little 600 square foot beach house, and that's exactly what I love about it.


Life has a way of taking serendipitous paths, and this is an example. I first learned about the architect Andrew Geller through my connection to the documentary producer, Jake Gorst.

Back in 2009, Jake was doing a documentary on the architect William Krisel, and was filming my Krisel-designed house while interviewing me for the film. Jake mentioned that his grandfather was a well known designer and modernist architect named Andrew Geller. Turns out, Geller led a very interesting life and made quite a name for himself in the design world (More on that in a bit). Jake showed me some of the homes he'd designed in the Hamptons, including the Pearlroth House. I was amazed.

Finally, this past September (2016), I found myself in the Hamptons by myself with a car and a free afternoon. I sent a note to Jake on the slim chance I could see the house. Jake called the Pearlroths, who happened to be at the house, and I was invited to stop by to hang out.

I'd seen photos of the house, but coming upon it for the first time, it still didn't seem quite real. Perched on top of a dune, the house seems to almost float.

Arthur and Mitch Pearlroth commissioned Geller to design and build their little beach home in 1958 after reading an article in the New York Times about a little A-frame that Geller had designed for a woman named Elizabeth Reese in the Hamptons town of Sagaponack (there aren't many modest homes being built there these days... times have changed). Geller had gotten the commission because they both knew each other from working in Loewy's firm together. The feature in the New York Times was a lucky break for Geller, and many more commissions followed. The Pearlroths' were impressed by the design, and that fact that it was both unusual and inexpensive.

The ingenious design of the Pearlroth house is interesting and fun to look at, but also extremely practical in that it creates an extremely small footprint on the sand dunes of the beach. This wood-framed house, suspended on four cedar posts, consists of two box shapes rotated sit on their edges, to form two diamonds. The boxes house the bedrooms, kitchen, and bathroom. The void between the two is glassed in to create the living area and fireplace.


What seems on the face of it to be a completely impractical idea for a house turns out to be quite ingenious - and it just makes sense. It creates a smaller footprint on the ground, which was often borne of necessity as building codes on the beach are strict, regarding setbacks, erosion and flood zones, etc. Also, the hurricane winds can blow the houses away, so Geller reasoned that creating more streamlined forms would help them resist this.

From inside, it really just feels like you're living in a small sailboat - which is appropriate, considering the site, and the idea that this house was meant to create beach house that could withstand abuse with little fuss or maintenance.

By the early 2000s, the Pearlroth house was in serious need of being refurbished, and was also located in the erosion zone on the beach. But instead of tearing it down, the owner - Jonathan Pearlroth, enlisted the help of the architectural firm of COOKFOX Architects to relocate the house a bit further back from the beach, and to do a complete restoration. The result is absolutely perfect. 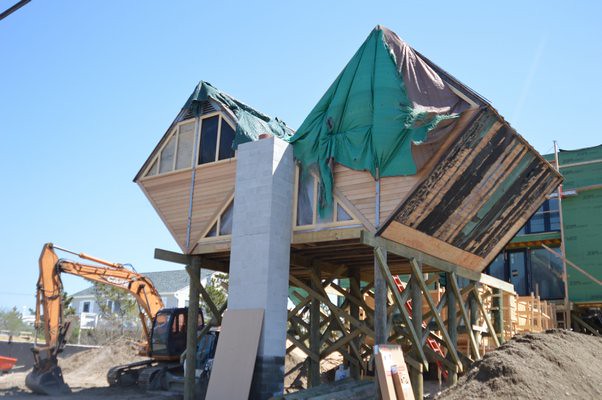 So who is the mad genius who created this house? Andrew Geller was born in Brooklyn, NY, in 1924, the son of Russian immigrants. His father was a sign painter. Andrew studied architecture at Cooper Union. Like most architects of his generation that I've researched a bit, Geller's biography includes a chapter serving in the military during World War II. He first worked as a naval architect, designing ships, and then for the U.S. Army Corps of Engineers.

Geller worked for the famed industrial designer Raymond Loewy after the war, and spent most of his career at that firm (around 30 years).  Raymond Loewy, who was born in France, was the father of Streamline Moderne design and embodied Americana design from the 30s through the 60s. His contributions to industrial and graphic design are too numerous to mention, but they include dozens of cars, trains, household appliances, etc. Loewy resided part time in Palm Springs, in a home designed by Swiss-born architect Albert Frey.


Now let me put a giant set of parentheses into this post to talk about the American National Exhibition (ANE) that took place in Moscow in the Soviet Union in 1959. I know this seems random, but it'll make sense in a minute. Just bear with me.

Anyway, the ANE was part of a cultural exchange that took place between the USA and the USSR during the height of the Cold War. It was decided that each country would hold an exhibition to showcase overall life in the other's respective country. It included pavilions that featured home appliances, fashions, televisions and stereos, farm equipment, automobiles, boats, sporting equipment, a children's playground, art, cinema, etc. Since this was during the Cold War, each country spared no expense in using this opportunity to demonstrate their cultural superiority.

The Soviet exhibit took place in New York City in June of 1959. It was largely a flop, and American visitors were not impressed. In fact, many quipped that it mostly served to remind Americans how lucky they were to live in America.


Later in the year, it was America's turn to hold their version in Moscow. The US State Department saw this as a golden opportunity for a propaganda coup of their own. So they spared no expense, enlisting some of the greatest, most creative American designers and artists of the time to create the pavilions and displays. These included George Nelson, Charles and Ray Eames, and Welton Becket, among others.

As somebody who has a history degree, and also an obsessive interest in Modernist design, let me tell you that this event is about as close to perfection as it gets for me. So I'm going to digress a bit more here.


Raymond Loewy's firm was tasked with adapting an existing design for a model home at the site, to showcase how a typical American family lived. As head of architecture for Loewy's firm at the time, the task of adapting that model home design fell upon... wait for it... Andrew Geller. Geller split the original design of the home in two so that it could be easier viewed by crowds walking through. The home was jokingly referred to as "Splitnick", in reference to the Russian satellite, "Sputnick".

This model house, which was meant to represent 'a typical American home', was the setting for the famous Kitchen Debates between Soviet Premier Nikita Krushchev and then Vice President Richard Nixon. During an official visit to the Exhibition, Krushchev scoffed at the modern conveniences featured in the house (such as a dishwasher and electric stove), and claimed that... "the house in the exhibition no more represented a 'typical American home' than the Taj Mahal represented a typical home to an Indian textile worker..."

The notoriety of that home and the subsequent publicity led to a commission to design the Leisurama homes that were marketed through Macy's, who sold them as turnkey units, complete with bedding, kitchenware, dishes, and even toiletries! There were over 200 of these built in a development in Montauk, and many others up and down the east coast (including Florida, apparently). These homes are far more modest and conservative than the homes Geller is known for, however.

Andrew Geller also worked with Isamu Noguchi for the interiors and courtyard of Skidmore, Owings & Merrill's Lever House, and went on to design a number of department stores and shopping malls for Loewy's firm.

Geller also started moonlighting while at Loewy's firm, and designed multiple beach houses on his own around the northeast while still employed there. Homes like the Pearlroth House and the others for which the architect would be best known are products of these efforts.

He even designed a concept for a portable beach house for Esquire Magazine, that could be folded up and towed by a car when not in use.

While most Modernist architects aspired (or at least claimed to aspire) to the notion of bringing good design to the masses, and to make housing affordable through Modernism, few actually achieved that goal. But Andrew Geller is one of those rare examples of an architect who delivered on that promise.

Andrew Geller passed away in 2011.

Surprisingly, considering the value of beachfront property these days, many of Geller's homes are still standing. I look forward to seeing more soon.

A big thank you to my friend Jake Gorst for making this happen. For more information, please check out his documentary film on Geller, and also his book, 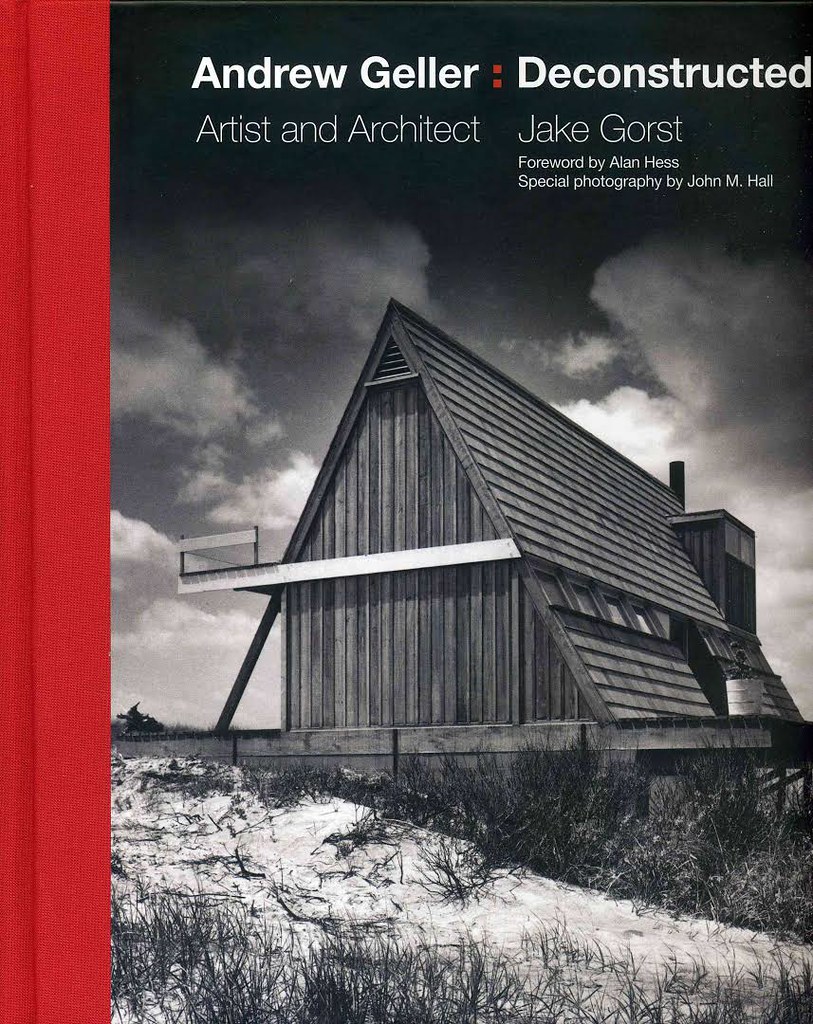 And very special thanks to Jonathan Pearlroth, son of the original owners, and his wonderful family for their warm hospitality! It was so nice to meet you guys.

If you are are interested in staying in the Pearlroth house, it is available to be rented here.

And finally, if you are interested in reading more about Andrew Geller, please go to Alastair Gordon's blog post on this incredible man. I don't know Alastair, but his knowledge of Geller is impressive and far surpasses my own. He also knew the man personally, I believe. Here's the link.
Posted by Unknown at 9:12 PM

I’m so glad to see this. Wonderful design.electrical switches

I'm from Long Island, and as a young person I loved to drive down Dune Road in Westhampton Beach and see the diamond house! Thanks for posting that. I never knew what that house looked like inside. It's beautiful!

Thanks for sharing of u! I very like yourblog (y) (y)

Great Post. So amazing and Keep sharing.
Are you looking for the best home elevators in India for your dream home, Then click here to know more about the size, design, etc.. Home lift India | Home elevator | Residnetial Lift | Home lift

unique and impressive buildings. every design has it own value. artistic, elegant, and simple such a perfect combination. thankyou for nice article tedbiesterbos.nl

The information you have posted is very useful. The sites you have referred was good. Thanks for sharing
Westhampton House Rentals

This post is great, thank you for sharing. Looking to get a home for rent? You can get it from Beach Vacation.
819 Dune Road Westhampton Beach NY